Recently, I've been constructing things. A few months ago, between jobs, I popped down to where I grew up to collect the last of my stuff. It's been some time! However, I didn't really want to pull things out until we'd bought a place, to avoid moving everything time and again. Then, when we'd bought a house, time for this kind of thing was incredibly limited. Anyway, the stuff's finally here.

Amongst all this stuff was a balsa-wood model aeroplane that I was constructing with my father, a project that must have stalled in the early '90s, if not before. The fuselage had been glued up, but that was it. Being something of a completionist, I worked through the rest, and it's now ready to paint! 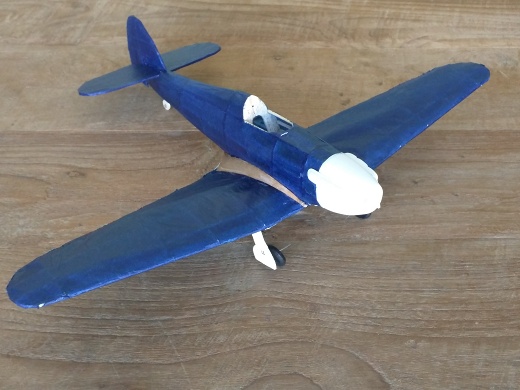 It's not a brilliant job, but it makes me happy. Things I discovered include:

"A 3D printer?" you say? Why, conveniently work has a 3D printer for our use, which looks like an extremely fun toy. It has the advantage that you can set it off, go do some proper work, and then come back when the print is done.

My first test was a Weighted Companion Cube, because I'm a fan of Portal. My first attempt went wrong when I failed to click the "add supports" button, leading to the printer attempting to doodle into space. One quick cancel later, and a reslice, it was off. With a well set-up high-end consumer printer, printing a small part, it seems that the whole thing's near idiot-proof.

This is the result. It's about an inch cubed: 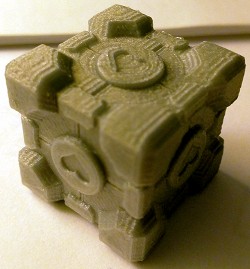 To my eyes, the quality is very good. You can see the printing artefacts, but they're relatively small. I am extremely tempted to try the acetone vapour smoothing trick, and see how it goes.