Electronics for Newbies 3: Faffing with memories

Skipping the fun of voltage regulation, which I'll come back to, I've been mostly playing with SRAM and EEPROM. I'll need these for my plan of building a simple microcomputer. First up was the SRAM. I built a simple circuit to allow me to load values into the SRAM and then read them back: 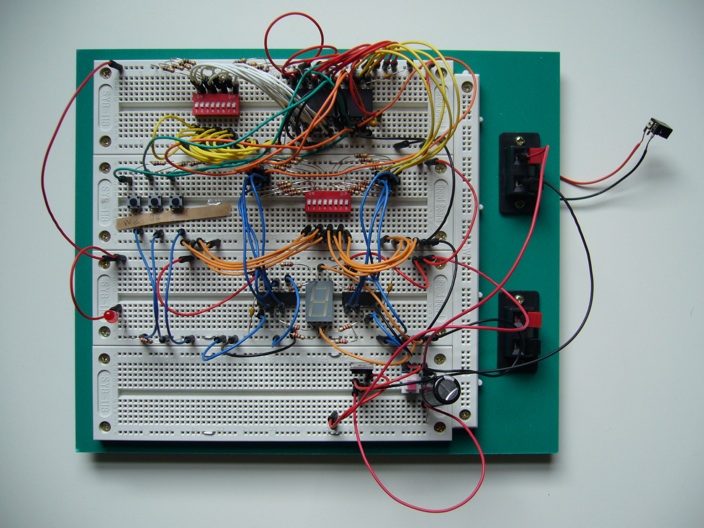 The structure's probably not terribly clear, so I've since done a schematic: 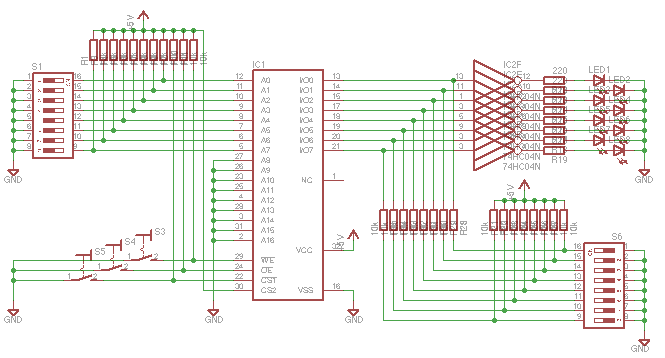 The schematic's messy because I'm too lazy to make it look really pretty. I've skipped decoupling caps and the power supply.

One thing I discovered that while building circuits directly is the easy way to go for simple designs, it doesn't stop you making simple mistakes. For example, when setting up a switch as a CMOS input, connect the switch and resistor in series, and then wire the input line from between the two components. Otherwise it doesn't work so well. Duh. Not so easy to spot in a rat's-nest of wires.

The resistors between the switches and the inverting buffers/SRAM side prevents me shorting an SRAM output to ground through a switch while reading its contents, and it seemed to be a source of surprising weird behaviour. Without enabling the SRAM, toggling some of the switches back and forth a bit left the LED glowing, as if the whole thing had got into some kind of metastable state or something.

Take the SRAM away (even thought it's supposed to be Hi-Z), and the problem goes away. Disconnecting a line from the SRAM and measuring its voltage (with a voltage divider attached, to make sure I'm not seeing some Hi-Z rubbish) showed the SRAM driving the line slightly (even though the thing's supposed to be in high impedance), once I've annoyed it enough on the other lines.

Reducing the size of the connecting resistors from 10k to 220 ohms (they are supposed to be simple current-limiters, after all) reduced the problem, but didn't make it go away. Sticking a small cap (0.1uF, IIRC) on one of the data lines made the problem go away completely! Then I could happily write patterns into various addresses and read them back. Woo.

I still have no idea why it was doing this. Given this was supposed to be a really straightforward circuit, and I'm hoping to build something much more complex involving this chip, running at actually reasonably fast speeds, I'm more than a little unnerved. I'm hoping a shedload of bypass caps will do the trick.

Then my EEPROM programmer arrived, from China, no docs at all. Still, it didn't look too dodgy, so I plugged it into my computer, downloaded some approximately-right looking software from the net, and it worked first time. I wired my newly-programmed EEPROM into the world's simplest reader circuit: 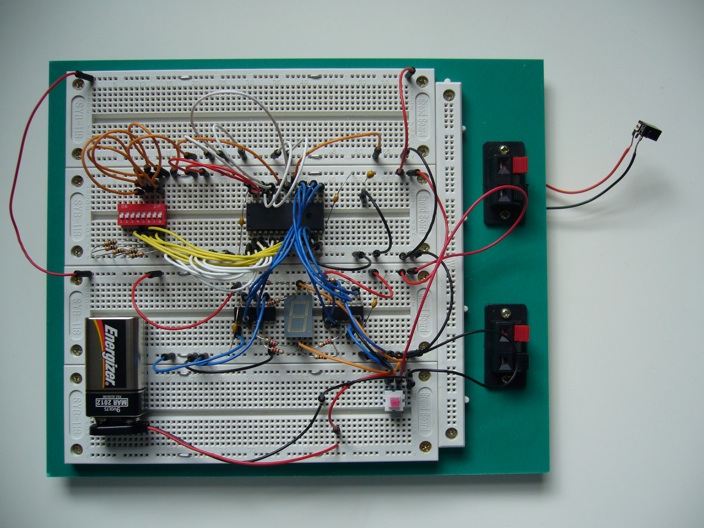 It worked. I had a massively-overkill hex digit to seven segment display converter. I am now officially back to first year undergraduate digital electronics level. Woo-hoo!