Once I realised my Nokia 'PSU' was outputting a decent number of unregulated volts, I thought it'd be good to get some voltage regulation in the picture. Given I'm living in a world of slightly retro CMOS (Z80s, etc.), I got a few 5V regulators. I bought myself a few Microchip MCP1826S-series linear regulators, and for fun a couple of switchers - National Semi LM2574N-5.0's.

The linear regulators are really straightforward to deal with and, in conjuntion with a decent-sized cap to smooth the supply from the wall wart, worked nicely. I thought that I'd be fine without heatsinks - after all, how much power will they be putting out? - and indeed it has been fine so far, but it does rather seem an omission now. These little regulators get awfully hot, even when supplying small circuits.

When I do the numbers, this does make sense. Powering a decent number of LED segments can put you in the region of a hundred milliamps. If the regulator's starting with a supply around 10V, the regulator's putting out a decent fraction of a watt. This may not seem like a huge power output, but the thermal resistance of one of these regulators without a heatsink is pretty high. The result is a regulator which is, ahem, 'noticably warm' to the touch. Fortunately, I doubt it's anywhere near a failure temperature. Nonetheless, there'll be a few 'sinks in my next parts order.

The switching regulators are much more fascinating devices. Vastly more efficient, they don't need a heatsink, and as you can get them in 8-pin DIPs, the combination of size and efficiency makes them sound perfect for running off a battery. Or so I thought. Enter Exhibit A. 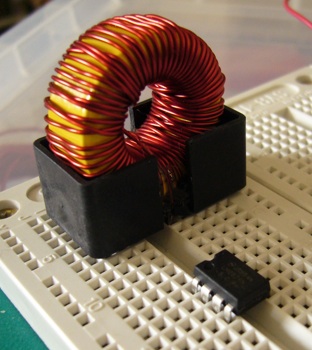 Er, yeah, that's the kind of size of component I want in a portable, battery-powered device. *sigh*. I think I over-specced it slightly, at 470mH, and perhaps I should have checked the dimensions before ordering, but that's not what I had in mind. I've seen inductors before on PCBs, but... nothing like that.

I notice that my EPROM programmer has an MC34063A to step 5V up to VPP, with a super-tiny (comparatively) 100uH inductor on it. The LM2574 datasheet is really quite dummy-safe, and is very explicit about which inductors to buy for it. I'm wondering if there's basically a trade off between idiot-proofing and designs using cheap, small components, and I've landed in the 'idiot' end. Ho hum. In any case, I've yet to actually build a circuit using the switchers, put off as I am by these huge coils....