David L. Jones apparently has too much influence on my life, as for my birthday I got one of those lovely Rigol oscilloscopes. It's still not modded to 100MHz, as I'm not playing with those kinds of frequency. Indeed David Frankau's also having a huge influence on my life (unsurprisingly), since I've hardly played with it, and my birthday was more than 2 months ago.

Still, the use I've had out of it has been terribly helpful. Starting off, I can see the bouncing when I flip a switch, or the logic delay propagation through a chip. I've got a photo of the latter, which just happens to show off my new pride and joy. 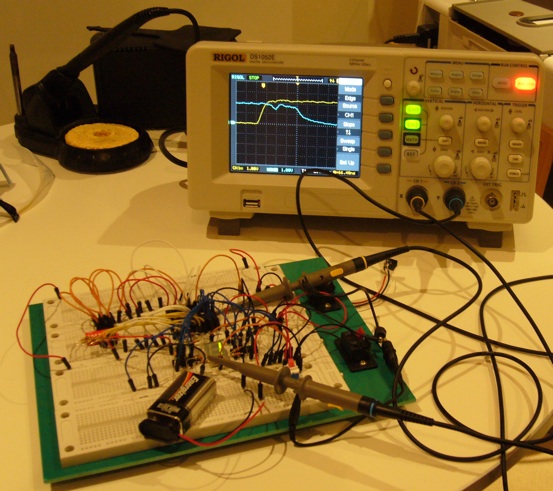 Really, though, it's been most useful when debugging, of which I've done more than anything else recently. As a demo, I've now got lovely little screenshots of my wallwart power supply's output, before and after smoothing. 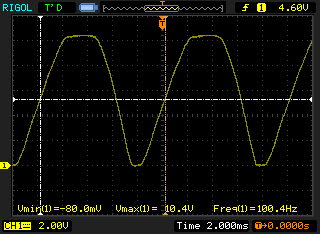 It's interesting to see the way the rectified waveform doesn't have a massively sharp bounce, and the top of the waveform isn't super-smooth-and-symmetrical. Once I've added a smoothing cap, all that's left is a little ripple - about half a volt by the looks of it. 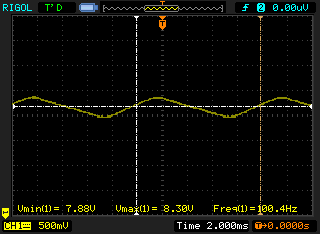 Lovely. Then I tried to show the result of regulation with the MCP1826S. Mucho weirdness. The output level was about right, but it was somehow pulling the input voltage way down, too. And this was with a very light load. That's not right, is it? Hmm. It's getting really hot, too. Since I'm using the dual channels of the scope as voltmeters, it frees my actual multimeter up to measure the current. Several hundred milliamps. That's really not good.

It's pretty happy when I run it off an old 9v battery, but this mains supply makes it go nuts. What does this tell me? It tells me to read the data sheet properly! While these regulators are nicely low drop-out, and are capable of driving pretty big currents, they can only take 6V in. That may be useful for driving low-voltage circuitry, but it seems a little lame for what a 5V regulator can handle. Silly me for not reading the datasheet, and after I've stuck 12-13V across them I'm now left with a couple of TO-220-packaged heaters. They certainly don't do a sensible job of regulation any more.

Anyway, now that I have a little more experience with oscilloscopes, I think it's time for me to go off and play with crystal oscillators....