Electronics for Newbies: A RAM-less microcomputer

After my success with a single-instruction computer, I decided to kick it up a notch: An output-only, ROM-only computer! Before describing my exciting journey I should point out that my previously analysis was wrong: The DJNZ 0x10 was jumping each time - not going to the next instruction - but as the instruction was the same each time, we were jumping by 0x10, and I was only monitoring the bottom few bits of the address bus, I couldn't tell the difference!

The changes were about as incremental as possible, so no exciting debugging was necessary. Between each step I tested, and there were no hideous surprises:

The final schematic (apart from the reset cap, which I forgot) looks something like the following. The part numbers aren't quite right because I'm lazy and the software I use didn't seem to have the exact parts. 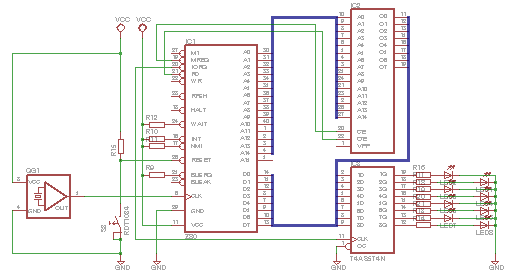 I have a lovely little video of the thing working, but I don't think there's anyone in the world sad enough to want to see it, so I won't put it online. Your loss!