One morning I tried to log into my 'nix box, only to discover it was off the network. Investigating further, it was off, full stop, along with everything else hanging off the same power strip. Further investigation revealed that the power supply for my el-cheapo network switch was broken. It rattled.

I was vaguely aware of the dangers of cheap dodgy chargers, yet I had somehow been blazé about the cheapo PSU bundled with the cheapo router, left plugged in 24 hours a day. I guess I'm glad the house hasn't burnt down! 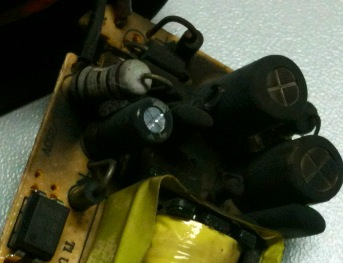 The introduction of switch-mode power supplies into those wall warts is fascinating. SMPSUs are really cool, and seeing them become so cheap, universal, and in many really rubbish is kind of amazing. Opening it up, the rattling part was the top that had been blown off the controlling IC. What triggered the failure, I'll never know, but everything around the chip was blackened. 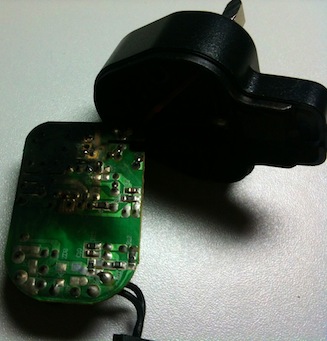 As indeed was half the other side of the PCB. It must have been quite the little explosion. Looking at the rest of the thing, it's quite fascinating. The transformer's tiny (and I think only really necessary over an inductor for isolation), and the mains pins are just wired up to the PCB with ickle wires. No fuses in sight. I guess it was a good thing it was put on a fused power strip.

I know that e.g. an Apple power supply will be an absolute work of miniaturised art, but seeing how a small switched-mode PSU is done badly is, in its own way, just as interesting!