I haven't been doing much electronics for quite some time, but I've been thinking about my next project: A 68K-based machine. While I could do all the glue with TTL, or go the other way and put everything on an FPGA, I would like something that keeps the spirit of discrete logic, but isn't so fiddly. Enter GALs, the follow-up to PALs and PLAs, and happily erasable and reprogrammable.

I bought a few off ebay, downloaded some equation-compiling software (open source - yay!), and I'm off. Compiling the JEDEC files was simple, and using my "Minipro" programmer was even more so - it supports Lattice GALs, even if it doesn't support the "compatible" Atmel parts. All I needed to do is put it in my test circuit and watch it work!

I built a test circuit, and... it didn't work. This is fun, compared to TTL, as there's whole new ways it might not be working. As well as electrical problems, the JEDEC file could have been prepared incorrectly by the compiler, or applied to the chip incorrectly by the programmer. Or it's just a hardware screw-up.

I looked around, and found a couple of bugs in the compiler, albeit ones that didn't affect the JEDEC output. It did not inspire me with confidence. After a while, though, I suspected the hardware. Was my output LEDs too much load? Had I screwed up the decoupling capacitors? Put some pins into the wrong state? Bad chip?

After much faffing around, it turns out the batteries I was using to power the circuit were running low. D'oh. A quick switch to the bench power supply, and it was running perfectly. Ho hum. The time waste was painful, but having some simple programmable logic devices is now opening up whole new (if small :) vistas of opportunities for me! 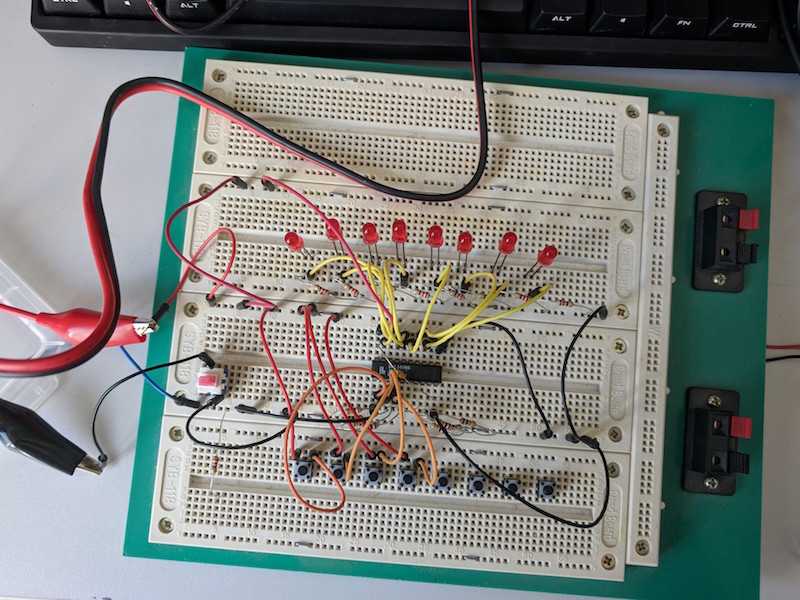