Aaages ago, my Macbook Air broke. The hinge snapped, doing nasty things to the display, and the official Mac repair route would have been so pricy that it didn't quite seem worth it. I bought another MBA second-hand, and my original came in handy for spares when the disk in the second MBA broken (the disk in my first MBA was already a replacement. They don't seem terribly reliable to me).

I finally got around to replacing the broken hardware. Getting an Official Mac Guy to fix it would have cost too much (especially given it's an original 2008 MBA, and thus nicely out of date). Using official Apple parts would have been too much. Even dodgy OEM parts where expensive enough.

What actually happened is the metal hinge 'clutch' broke in two. The pieces spronged, and ground against nearby bits of case to break the plastic antenna cover. Also, because the hinges were no longer lining up properly, moving the display caused the hinge assembly to eat into the LVDS cable, until the screen display stopped working.

So, new hinge clutch, antennta cover and LVDS cable. Oh, and a replacement disk, for the one I scavenged earlier. I settled on an SSD this time. Maybe it would be more reliable. I had to fully disassemble the MBA, including ungluing bits of the display assembly. It now works (better than the other one, thanks to the SSD), even if the display bezel looks a bit dodgy. 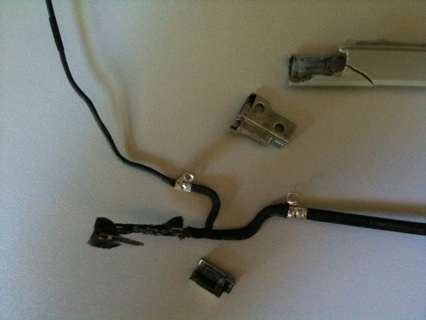 I feel I should put up a picture of all the broken parts (apart from the disk - that just looks like a working disk), so here you go. You can see the hinge clutch in two parts, the antenna cover with a bit broken off, and the LVDS cable with a bit of a cut in it. All very exciting.