Enjoying my recent success in crafty things, I had a go at creating something I'd wanted for quite some time: A ZX Spectrum taped-loading-themed scarf! A very rough introduction is that the tape loading was accompanied by horizontal coloured bars in the border area: it consisted of even red/cyan bars (accompanied by a constant tone), followed by uneven yellow/blue bars, representing the data itself. So, I wanted a scarf with red/cyan stripes at the end, and yellow/blue in the middle.

I'd wanted one for a while, but didn't think exactly anyone would want to make one, certainly not to my odd and exacting standards! After doing the cross-stitch business, I realised I could do it. I'd never knitted before (or since), and I only learnt how to knit - still no idea about purling! However, this was enough to get me going.

So, the gear: I opted for 6mm bamboo knitting needles. Apparently wood is good for beginners, as it's not too slippy, so less chance of it all falling off the needles (a bad thing). 6mm is reasonably chunky, but that goes with chunky wool, if you want to do chunky knitting! Chunky knitting means less knitting to cover a certain area, and given my impatience, that seemed like a good thing. For a scarf, chunky knitting looks pretty ok.

Then, I bought wool. This was a surprise - the colour selection is rubbish. Even going to a big online store, it's pretty limited. I wanted really bold primary colours, and... the selection is poor. I ended up with 50g balls of 'Bergere de France Magic+' in Brique, Estuaire, Seneve and Gynura. This is a 'chunky' wool, and handy interweb scarf calculators told me that 4 balls would be about right for the scarf I was looking at. I should have perhaps got a bit more, but at around a fiver a ball, I thought it'd be overkill.

So, onto the knitting itself. Each stripe was a multiple of two rows (across and back), so that the colour-changing always happened on the same side, simplifying my life. I was quite surprised how easy it was to get a reasonable pace with the knitting - nothing insanely fast, but it doesn't take much practice to get going. Of course, in places I have uneven tension or lost or gained stitches and other weirdness, but reasonable uniformity came pretty quickly.

Within the tolerances of the pattern, I tried to get the relative band widths correct, using the timings from The Spectrum ROM Disassembly. This book also provided me with the details of the encoding and colour pattern. So, I knitted the lead tone, the sync bit, the data block header byte (0xFF, I think), 'SF' in ASCII, and then the parity byte. Unfortunately, at this point I ran out of wool (I had plenty of red/cyan, but not yellow/blue). So, I finished off with another red/cyan lead tone. (One thing I hadn't really realised before is that you can only get one side having the exact pattern you want - the other side switches the lines about a bit - you can see this in the picture with David). 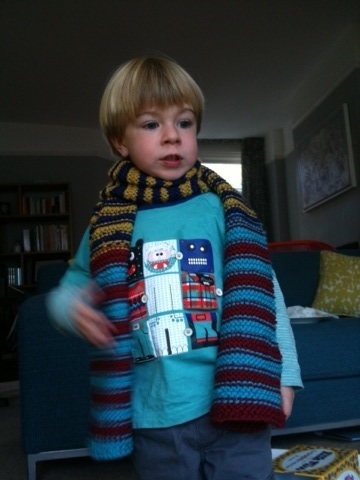 In effect, the scarf contains data as if the end of the data block were overwritten by another lead tone, just like the kind of stupid mistakes I used to make when recording on the Spectrum! If you tried to load this scarf, the data would load successfully, but you'd get an 'R Tape loading error'!

How happy am I with the result? My itch has been scratched. The quality's not perfect but it's good enough, the length is just a little short (but I couldn't face spending 30 pounds just on wool!), yet it covers my neck, it has pedantic attention to detail on the technical side, I learnt to knit, and it amused my work colleagues. Can't ask for more than that, really...