Inside a clothing security tag

Those security tags you get in clothes shops have always been mildly mysterious to me. Somehow, we ended up with a tagged item of clothing at home - looks like the shop assistant failed to remove it. Whatever alarm was supposed to go off as we left the shop either didn't, or was ignored. So, I got a hacksaw out and cut off the pin that goes through the clothing, and it all turned out fine. Then, I thought I would take a peek inside it.

I was a bit worried because I'd heard about those ink tags that stick permanent ink over eveything if you tamper with them. No such problem. Indeed, what I found was that the whole thing was nothing like tamper-proof at all. The main thing about the design, I'd say, is "cheap". It's a little strange to me that they're quite so cheap. After all, they're regularly recycled as they should never leave the shop! If they're marginally more expensive, but make theft that much more difficult, it sounds worthwhile.

Anyway, cutting off the back reveals a central bit holding the pin, plus a coil and capacitor: 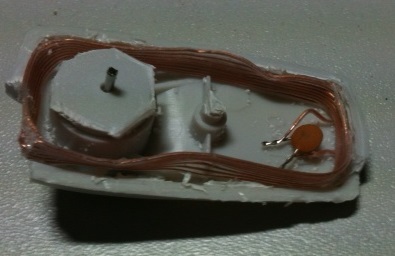 The coil and cap are completely separate from everything else, forming an LC resonator for the alarms at the exits:

The rest is basically a shell to hold the pin-holding elements: 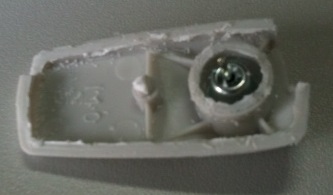 Taking apart that structure, you can see how it works:

The spring at the right pushes the small metal cap into the big metal cap, jamming the ball-bearings against the pin, as far as I can see. I'm surprised this provides so much force to make the pin so difficult to remove, but apparently it does! As far as the removal devices go, I think they're just Really Strong Magnets, since most of the chunks of metal involved are magnetic.

I guess this is just another example of looking inside a mysterious security device and finding out that the security involved is actually quite straightforward, prosaic and breakable!