So, sewing. I want to make a few bits and pieces that involve the use of a sewing machine. I still find the mechanism behind sewing machines utterly nutty, but fortunately you don't have to think about the mechanical magic while using them.

The first thing I did was try to knock up a couple of shapes to practise "invisible finishing", which I'm quite frankly rubbish at: 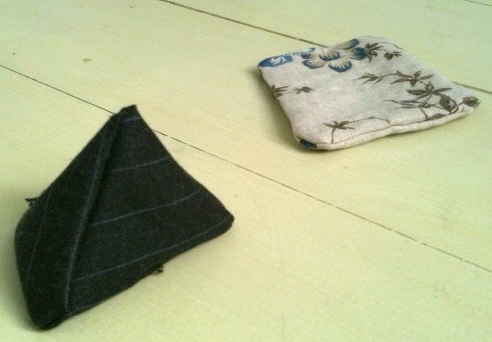 Bearing in mind I've tried to put the best side to the camera, you can see it's not great! I tried to construct a square (not terribly straight edges) and a tetrahedron (a slightly better shape, but the finishing in the corners is nafff.

Then, a very simple project: A keyboard bag. Given the silly amount of time I spent working on my DIY keyboard, it seems to make sense to keep it safe when transporting it. So, I constructed a keyboard bag. No invisible finishing, no fancy lining, just a piece of fabric sewn up two sides with a bunch of fiddling at the top for a draw-string:

It does the job, and I'm pretty happy with it. One thing I've learnt with this, as with most craft/making stuff is "don't make mistakes". Catching bugs early in programming is vital to good productivity. When you deal with the real world, it's even worse. Undoing physical mistakes can vary from "difficult" to "impossible", and certainly slows you down. Much easier to spend a bit of time sewing the right line than to tediously unpick a piece of bad sewing. In that respect, computers and "undo" have spoilt me.