It's been 3 years since my last knitting project, and I recently bought a book on knitting, so it seemed time to create a new project. Plus we had this weird multi-coloured wool lying about the place.

Last time, I knitted and only knitted. I never learnt to purl. This meant I ended up producing garter stitch, which is frankly not as pretty as the stockinette everyone's used to. This time, I learnt to purl!

(The book recommends using plain wool when learning, but this multi-coloured stuff's pretty good, since the colour changes make it all a bit clearer as to what's going on.)

Actually, I tried to do a bunch of fancy stitches, and tended to end up with accidental yarn-overs when switching between knit and purl within a row, so I just fell back on doing a bunch of stockinette. Caroline then suggested making mini circular scarfs for the kids (or "snoods", although I can't face the term), so that's what I did.

Once I got the hang of stockinette I put in a bit of switching over the stitches in order to create initials on the scarves to distinguish them. The first one I just tried creating a region of inverted stockinette, but that didn't work so well - the way it tends to curl in opposite directions at the sides and ends meant that some bits bumped up, and some down. For the second one, I tried doing the initialed area in garter stitch. It more or less worked. Hey ho.

End of step one, it looks liked this: 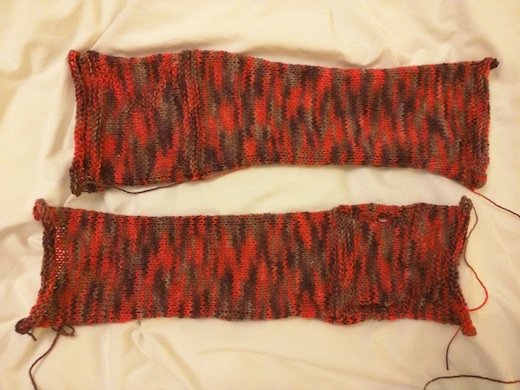 You can see they look a little, err, uneven. Rather like my first scarf. Apparently the secret is "blocking", which is a fancy term for pinning it out and getting it wet and making it dry in the right shape. Doing this properly involves threading stuff around the edge to to get a nice straight edge, but I did a lazy version:

I think they came out ok. You can see a certain amount of twisting up around the edge, but that's just what stockinette does, apparently. If I don't want that I have to put some fancy edging on. I'll live. 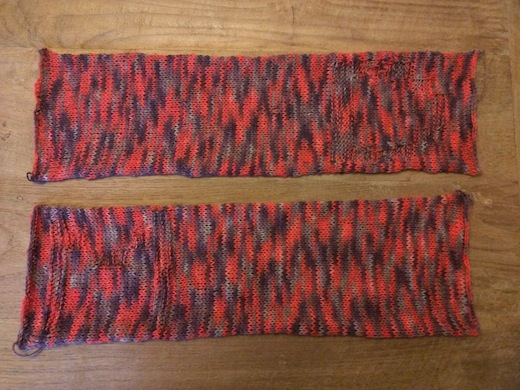 Finally, I stitched up the edge to create the loop, and I have a couple of home-made if slightly naff Christmas presents! If Daddy can knit, perhaps this will convince the children that women can be astronauts and doctors.... 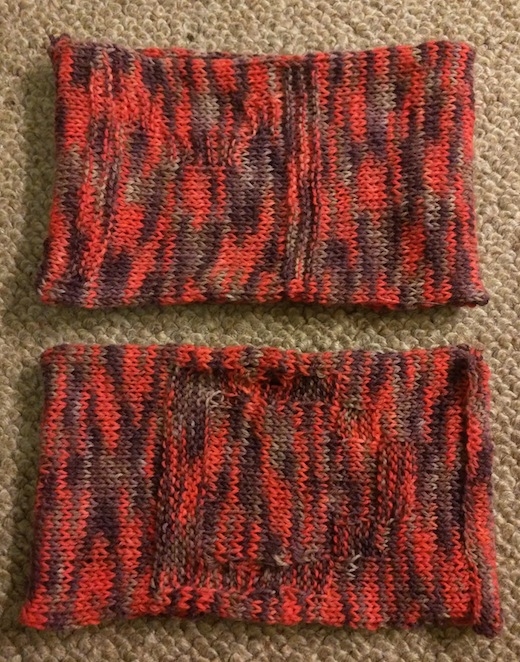